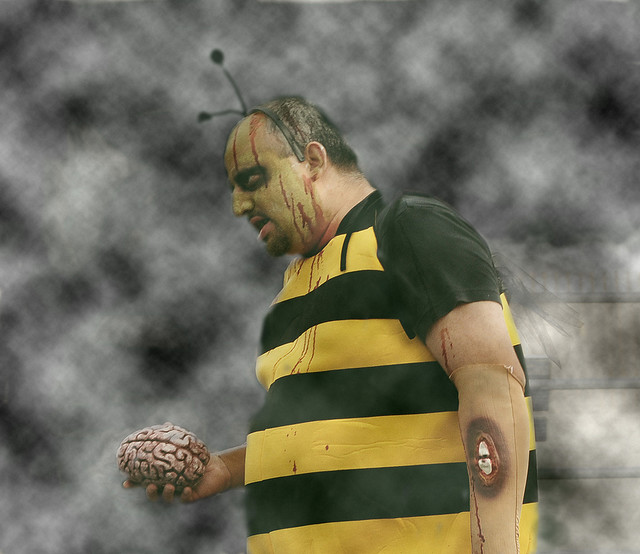 Colony Collapse Disorder is destroying honey bee populations around America. Honey bees are an integral and essential but fragile part of the food chain. Unfortunately like we humans, they are not immune to virii and zombie parasites.

Discovery of the bee parasite and their subsequent strange death came as a surprise to researcher John Hafernik at San Francisco State University. He made the discovery by accident, after he foraged some bees to feed to a praying mantis. The bees were left unattended in a vial and soon began to die, but not in the usual way of sitting still and curling up.

“They kept stretching [their legs] out and then falling over,” said his graduate student Andrew Core. “It really painted a picture of something like a zombie.”

The parasite Apocephalus borealis lays its eggs in the bee’s abdomen. The larvae then push their way into the world, often exiting between the bee’s head and thorax.

The quote from the graduate student is surely sensational and perhaps taken slightly out of context, but mass honey bee death is still quite unsettling. This parasite could be working in combination with many other factors, leading to the mass die-offs. Regardless, there’s only one thing worse than bees.