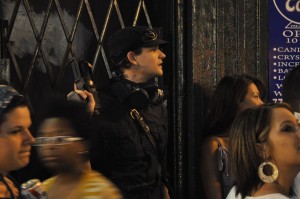 It’s a part of the weltgeist — people dress up like zombies, shamble about and… dance?

Well, they try to dance anyway. Saturday  July 25th, approximately 450 to 500 (some liberal estimates put the horde at 1,000) zombies were found congregating in Chicago’s Wicker Park. Many of them were later found to be hipsters, and promptly exterminated. The remainder were allowed, under close supervision, to shamble in an orderly fashion around the neighborhood. 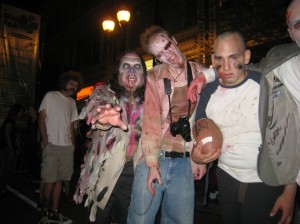 Surprisingly, there was no Chicago police interaction.  Passersby on buses, taxis and cars were understandably frightened, but no casualties were reported. Patrons at local restaurants, bars and shops were visibly agitated and confused, although the majority found the situation to be humorous. 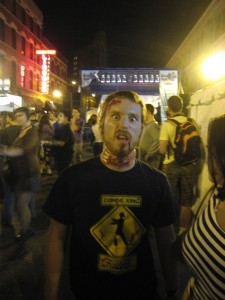 The unruly mob made several unsuccessful attempts to pester and/or eat and/or thrill three zombie hunters on the scene, but again, no injuries have been reported.  The mob stopped in front of an abandoned street festival music stage where after mindlessly wandering about, were suddenly drawn to the soothing, hypnotic and very not-undead sounds of the late and very dead Michael Jackson’s “Thriller”.

The zombie hunters came equipped with “demo” Nerf weapons. It’s not advisable to bring Airsoft, live blades or real firearms to non-real undead gatherings, for obvious police and safety concerns. Nerf weapons are absolutely no substitute for actual, hands-on weapons training. I have had several readers ask me this question. Nerf weapons are great for the Humans vs Zombies game, but are strictly for fun and show. If you’re not old enough to legally own, purchase, or train with firearms, I suggest knowing someone who does, befriending and learning from them, and taking martial arts courses specializing in pole arm or blade combat.

This sort of celebration or zombie flash-mob has been occurring in many cities with surprising frequency. It is yet another indication that an underlying fear of zombies pervades our culture.

More photos and updates coming next week, I’m in Michigan for training.